Previous Next
Sponsored by 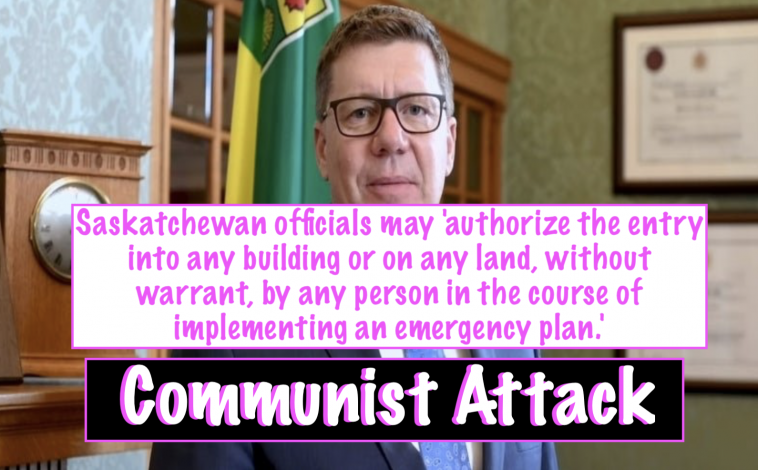 Saskatchewan officials may 'authorize the entry into any building or on any land, without warrant, by any person in the course of implementing an emergency plan.'

(LifeSiteNews) – A Canadian provincial government enacted Orwellian-like emergency powers in the name of fighting COVID that allow for officials to detain or remove people without a warrant and seize personal property at will.

Under new health orders, the Saskatchewan minister may “authorize the entry into any building or on any land, without warrant, by any person in the course of implementing an emergency plan.”

The government is also afforded the power to “cause the evacuation of persons and the removal of persons or livestock and personal property(the Communists always come for your food)from any area of Saskatchewan that is or may be affected by an emergency and make arrangements for the adequate care and protection of those persons or livestock and of the personal property.”

The new Provincial Emergency Order under The Emergency Planning Act was signed September 13, by Premier Scott Moe. The orders were announced by the Saskatchewan Ministry of Health.

According to the ministry of health, the new orders are needed to “provide for health system labour mobility through greater flexibility in scheduling and redirecting health care workers to areas experiencing capacity pressures and in the use of supplementary resources.”

The new emergency health powers allow the government to “assume direction and control of the emergency response of a local authority.”

They also give the government the power to “acquire or utilize any real or personal property that the minister considers necessary to prevent, combat or alleviate the effects of an emergency.”

As part of this order, the government reactivated the terms of a Letter of Understanding with the Saskatchewan Health Authority and a slew of provincial unions, including the Saskatchewan Union of Nurses and Health Sciences Association of Saskatchewan.

The Letter of Understanding spells out how the government can force the “temporary redeployment of health care employees to meet the anticipated increase in COVID-19 health care needs.”

Every person residing in Saskatchewan is mandated by law to follow the new emergency orders or face severe penalties or possible jail time.

The new orders came about after the government declared a “fourth wave” of COVID-19 spurred by the “Delta variant.”

The province with a population of around one million currently says 262 people are in hospital due to COVID-19.

On September 17, Dr. Saqub Shahab, the province’s chief medical health officer, issued a mandatory interim isolation and face-covering order as a stop-gap until the province’s vaccine passport comes into effect in October.

Moe recently said his government was “too patient” with those who have not had the COVID jabs while introducing a vaccine passport.

Moe’s words against the unvaccinated also included a line that, although he never wanted to “implement” a vaccine passport, his “patience has come to an end” with the un-jabbed.

Starting October 1, one must show proof of vaccination or a negative test to eat indoors, go to entertainment venues, attend conferences or large events, or participate in indoor fitness centers.

All Canadian provinces have for a long time had the power to enact such draconian rules, which in effect limit people’s rights in a time of emergency, but using a “health” emergency to do so is unheard of in modern times.

The province of Alberta also recently declared a public emergency under its Public Health Act. Like Saskatchewan, the government can enter buildings without a warrant or seize personal property.

Alberta Premier Jason Kenney, despite promising his province would be open “for good,” introduced a COVID-19 vaccine passport recently. He has also enacted new rules banning “unvaccinated” people from gathering in their private homes.

John Carpay, president of the Justice Centre for Constitutional Freedoms (JCCF), said that by “virtue” of the Kenney government limiting the fully jabbed to “indoor social interactions of no more than 10 people,” the government “acknowledges that vaccinated people are spreaders of viruses.”

“What evidence does the government rely on for its belief that unvaccinated people are worse spreaders of viruses than vaccinated people,” Carpay said in a statement sent to LifeSiteNews.

The COVID-19 injections approved for emergency use in Canada, including the Pfizer jab for ages 12 and up, all have connections to cells derived from aborted babies.

All four have also been associated with possible severe side effects such as blood clots, rashes, miscarriages, and even heart attacks in young, healthy men.

The list of FDA-recognized adverse events has grown from severe anaphylactic reactions to include fatal thrombotic events, the inflammatory heart condition  myocarditis, and neurologically disabling diseases like Guillain Barré Syndrome. Meanwhile, the CDC reported a COVID-19 infection survival rate of greater than 99.95% for those under age 50. 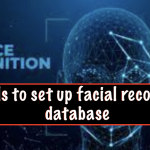 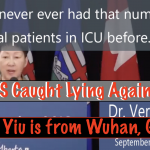