Pfizer has responded to accusations that it carried out a secret operation to silence Covid vaccine critics. Dr. Scott Gottlieb, who was the focus of the #PfizerFiles release on Monday, lashed out against the release by saying that such criticism has put him in danger.

“In the past, I’ve raised concerns with Twitter related to the safety of me and others, and threats being made on the platform,” Gottlieb argued. “This included direct as well as specific threats. Sometimes it included statements that I believed were purposely false and inflammatory.”

“The selective disclosure of my private communications with Twitter stokes the threat environment,” he argued. “So does actions that empower people who’ve shown little restraint when it comes to purposeful vitriol. It instigates more menacing dialogue, with potentially serious consequences.”

This has been a familiar defense among powerful elites: If exposed for potential wrongdoing, even if it affects millions of people, claim they are the real victims.

But Alex Berenson, a popular mRNA vaccine critic, has responded to the veiled legal threat by announcing that he intends to sue Dr. Gottlieb, Pfizer, and the Biden administration.

It was recently revealed by Elon Musk’s #TwitterFiles that Pfizer executive board member Scott Gottlieb had contacted Twitter’s top lobbyist in August 2021 to shut down conversation on the social media platform about natural immunity.

“For those of you who’d rather see the whole Gottlieb #TwitterFiles in a thread… here goes!” he tweeted. “On August 27, 2021, Dr. Scott Gottlieb – a Pfizer director with over 550,000 Twitter followers – saw a tweet he didn’t like, a tweet that might hurt sales of Pfizer’s mRNA vaccines.”

“The tweet explained correctly that natural immunity after Covid infection was superior to vaccine protection. It called on the White House to ‘follow the science’ and exempt people with natural immunity from upcoming vaccine mandates.”

“It came not from an ‘anti-vaxxer’ like Robert F. Kennedy Jr., but from Dr. Brett Giroir, a physician who had briefly followed Gottlieb as the head of the Food & Drug Administration. Further, the tweet encouraged people who did not have natural immunity to ‘Get vaccinated!’”

“No matter,” he continued. “By suggesting some people might not need Covid vaccinations, the tweet could raise questions about the shots. Besides being former FDA commissioner, a CNBC contributor, and a prominent voice on Covid public policy, Gottlieb was a senior board member at Pfizer…”

“Pfizer depended on mRNA jabs for almost half its $81 billion in sales in 2021 and paid Gottlieb $365,000 for his work that year,” he added. “Gottlieb stepped in, emailing Todd O’Boyle, a top lobbyist in Twitter’s Washington office who was also Twitter’s point of contact with the White House.” 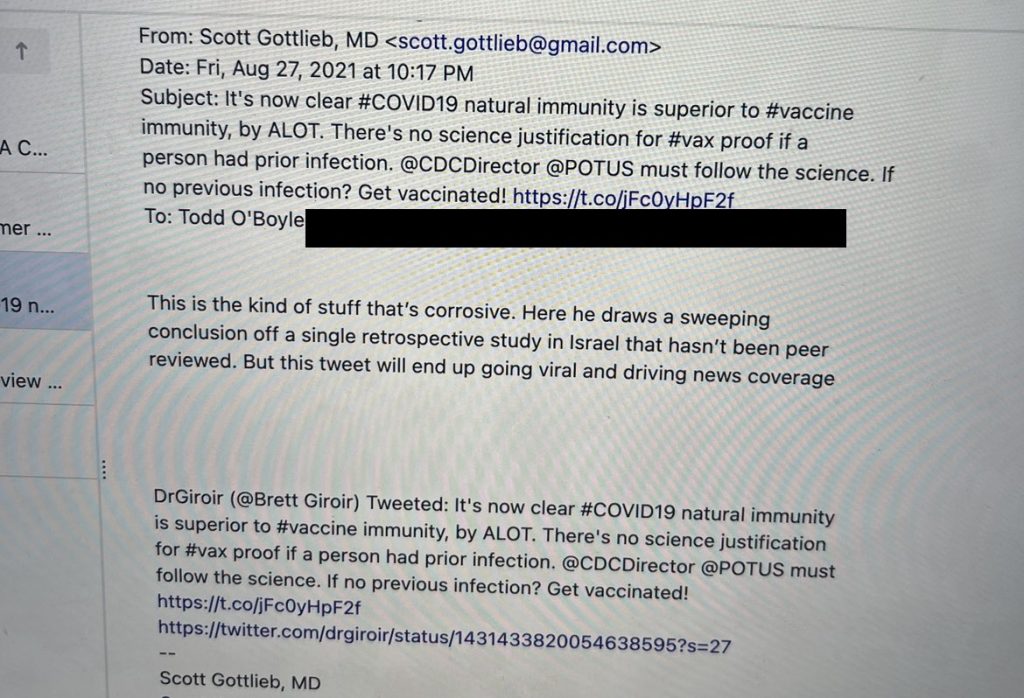 “The post was ‘corrosive,’ Gottlieb wrote. He worried it would ‘end up going viral and driving news coverage’,” Berenson noted.

“I found the email in a search of records I ran at Twitter last week – part of Elon Musk’s ‘Twitter Files’ effort to raise the veil on censorship decisions Twitter made before Musk bought the company in October. I went into detail about my involvement at the Twitter Files in a Substack article yesterday. I plan more reporting on the files in the weeks to come.”

Berenson provided more details on how he located the Gottlieb email and on further actions he sought against critics.

“Through Jira, an internal system Twitter used for managing complaints, O’Boyle forwarded Gottlieb’s email to the Twitter ‘Strategic Response’ team,” he went on. “That group was responsible for handling concerns from the company’s most important employees and users.”

“Please see this report from the former FDA commissioner,” O’Boyle wrote, and “failing to mention Gottlieb was a Pfizer director with a financial interest in pushing mRNA shots,” Berenson remarked.

“A Strategic Response analyst quickly found the tweet did not violate any Twitter misinformation rules,” he notably added. “Yet Twitter wound up flagging @DrGiroir’s tweet anyway, putting a misleading tag on it and preventing almost anyone from seeing it.”

“It remains tagged even though several large studies have confirmed the truth of Giroir’s words,” he noted. 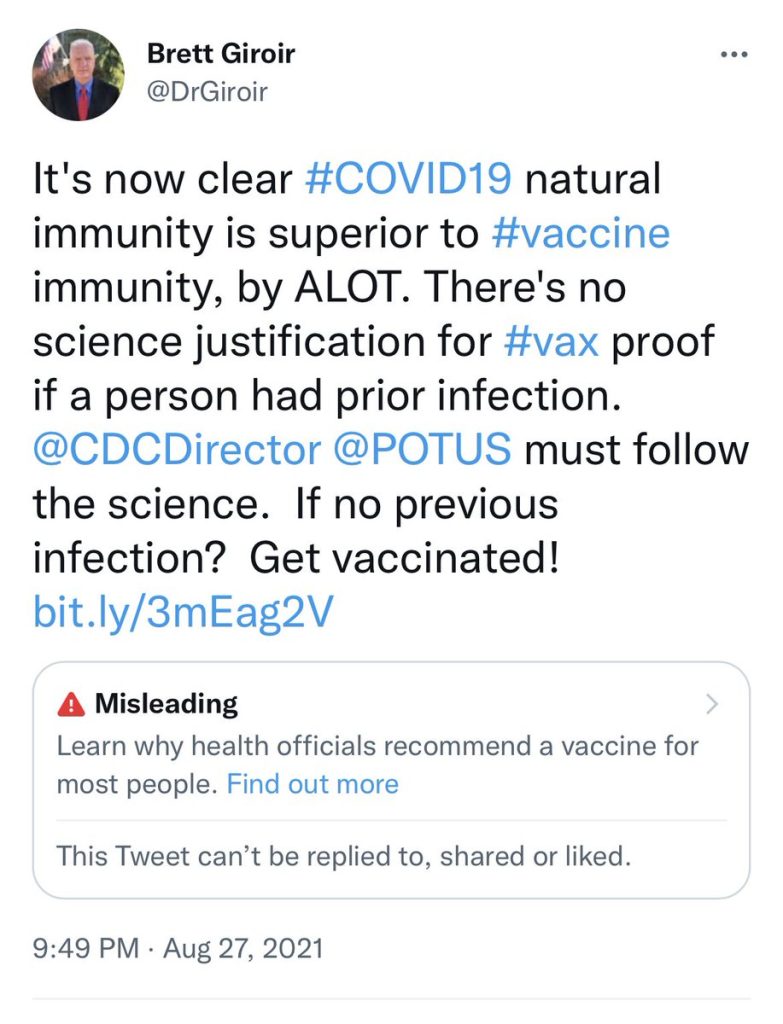 I will add here that this is far from the only such accurate tweet that Twitter flagged as “misleading” about Covid-19. Eric Spracklen, who works for Project Veritas, remarked on an undercover video showing Pfizer scientists admitting that natural immunity was likely superior to vaccinated immunity. Twitter also flagged it as “misleading.”

“A week later, on Sept. 3, 2021, Gottlieb tried to strike again, complaining to O’Boyle about a tweet from Justin Hart,” Berenson continued. “Hart is a lockdown and Covid vaccine skeptic with more than 100,000 Twitter followers.”

“Sticks and stones may break my bones but a viral pathogen with a child mortality rate of <>0% has cost our children nearly three years of schooling,” Hart had written.

“Why Gottlieb objected to Hart’s words is not clear, but the Pfizer shot would soon be approved for children 5 to 11, representing another massive market for Pfizer, if parents could be convinced Covid was a real threat to their kids,” he added.

“O’Boyle referred to ‘former FDA Commissioner Gottlieb’when he forwarded the report, again ignoring Gottlieb’s current work for Pfizer,” he noted. “This time, though, Gottlieb’s complaint was so far afield that Twitter refused to act.”

“At the same time, Gottlieb was also pressing Twitter to act against me, as I disclosed on Substack on Oct. 13, 2022, drawing on documents that Twitter’s pre-Musk regime provided to me as part of my lawsuit against it,” he remarked. 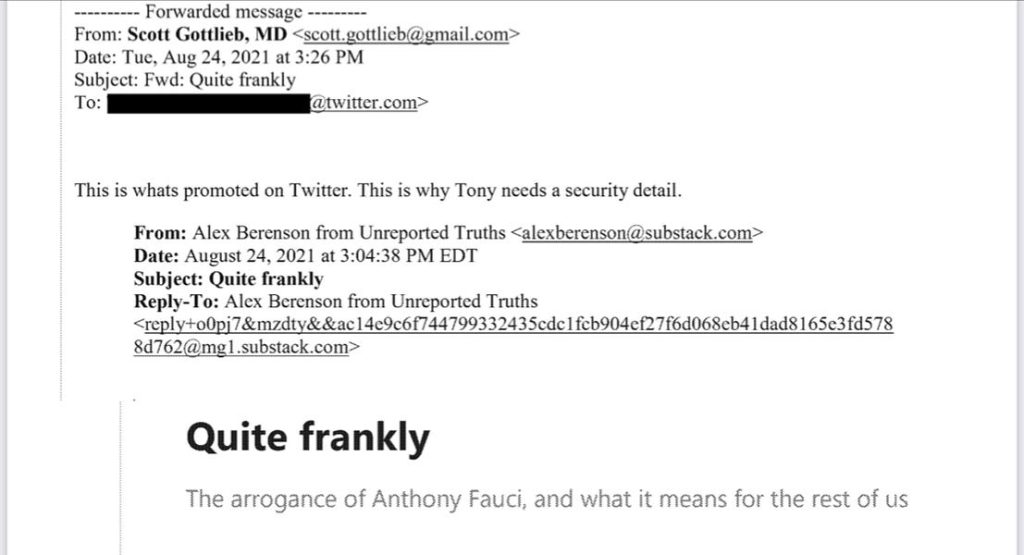 Berenson notes that “Pfizer board member Scott Gottlieb secretly pressed Twitter to censor me days before Twitter suspended my account last year. After White House pressure failed to force Twitter to ban me immediately, Gottlieb, who was in contact with federal officials, stepped in; I will be suing him, Pfizer, and the Biden Administration.”

“Gottlieb’s action was part of a larger conspiracy that included the Biden White House and Andrew Slavitt, working publicly and privately to pressure Twitter until it had no choice but to ban me,” he added. “I will have more to say about my own case and will be suing the White House, Slavitt, Gottlieb, and Pfizer shortly.”

“The morning after I wrote that article, Gottlieb appeared on CNBC, the financial news channel where he is a contributor, and offered what at best was a seriously misleading explanation of his actions and his motives,” he remarked.

“Gottlieb did not deny pressing Twitter on me – he could not, given the documents I had released,” Berenson said. “But in an interview with @JoeSquawk of @CNBC, Gottlieb said he had asked Twitter to act only bc he was concerned if tweets raised the threat of violence against vaccine advocates.”

“The inability of these platforms to police direct threats, physical threats about people, that’s my concern about what’s going on in that ecosystem,” Gottlieb said.

In a tweet that morning, Gottlieb doubled down, writing: Respectful debate and dialogue is one thing, and should be encouraged and protected. But there’s no place for targeted harassment, and misleading dialogue…”

“But Brett Giroir’s tweet about natural immunity was the definition of ‘respectful debate and dialogue.’ And in his own email to Todd O’Boyle, Gottlieb did not raise any security concerns about it,” he added. “He simply complained that it might wind up ‘driving news coverage’.”

“Gottlieb is not just a Pfizer board member,” Berenson goes on. “He is on the board’s executive committee and the head of its regulatory and compliance committee, overseeing ‘compliance with laws, regulations, and internal procedures applicable to pharmaceutical sales and marketing activities’.”

“Pfizer has a long history of violating drug industry laws and ethics rules,” he added. “In 2009, it agreed to pay $2.3 billion, the largest health care fraud settlement in American history, for fraudulently marketing several drugs.”

“In 1996, it conducted a clinical trial of an antibiotic in Nigeria in which 11 children died and which became the inspiration for John le Carre’s novel The Constant Gardener,” he remarked.

“So how will Pfizer react to the black-and-white proof from Twitter’s records that one of its most powerful board members secretly tried to suppress debate on the mRNA jabs that have has been by far its best-selling product since 2020?” Berenson asked rhetorically. “And will CNBC continue to let Gottlieb use it to mislead the public?”

In an interview with the BBC, Bourla claimed that “there is no doubt in my mind that the benefits, completely, are in favour of” vaccinating children ages five to 11 against Covid-19.

“There is simply no evidence that healthy schoolchildren in the UK are at significant risk from the SARS COV-2 virus and to imply that they are is disgracefully misleading,” watchdog group UsforThem said.

The pharmaceutical company is already being sued by Pfizer whistleblower Brook Jackson, who is citing ‘falsified data’ and manipulated clinical trials in her legal argument that the company committed fraud. 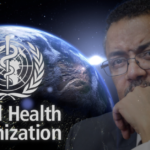