Swedish court revokes deportation of Syrian criminal who trafficked and assaulted a woman, saying he may get killed in Syria

A district court in Sweden has revoked the deportation sentence of a Syrian refugee Majd Shhada, who has been convicted multiple times for offences such as rape, assault, theft and drug abuse. While revoking his deportation, the Court of Appeal for Lower Norrland contended that the accused might be at risk of military service in his home country, Syria.

Another factor given by the court to defend the ruling was Majd Shhada’s ‘possibility of becoming a parent soon.’ Notably, the woman who was trafficked from Syria by the accused and assaulted multiple times is pregnant and expecting a child with Majd Shhada.

On January 9, popular Twitter user Ashwini Shrivastava shared a thread of Tweets where he gave out information about the aforementioned case. “Sweden: A Syrian refugee Majd Shhada with 8 convictions, who savagely beaten, raped & impregnated a young woman, to avoid deportation Court ruled him, He will not be deported because his homeland is ‘too dangerous’ & he risks military service,” his tweet read.

In a subsequent tweet, Ashwini Srivastava stated that the accused Majd Shhada arrived in Sweden as a refugee from Syria in 2018. He is accused of raping and assaulting a woman he trafficked from Syria to Sweden and has been living in the same house with her since. In addition, he has been convicted in Sweden of multiple thefts, threats, and petty drug offences.

According to the Swedish News portal Samnytt, Majd Shhada’s neighbours routinely informed the police about conflicts and noises coming from the accused’s home. Majd, who routinely abused his partner, has previously been arrested for assaulting the woman. The woman had been to the hospital multiple times and her injuries had been documented. However, because the wife used to come to his defence, the accused was often saved from prison.

This time too, when the cops arrived at his flat, they were confronted by a badly bruised woman, a smashed apartment, and a violent and screaming Majd, like they have done so many times before. The woman was taken to the hospital by ambulance, while the man was detained and brought to the police station.

Narrating the terror she has been through for over a year, the woman told the police that Majd Shhada use to beat her up so violently that she feared for her life on multiple occasions. Among other things, he once also tried to strangulate her with a shoelace.

On November 14, 2022, the Ångermanland district court sentenced Majd Shhada for gross violation of women’s rights, a crime the court believes has been going on since 2021. He was sentenced to nine months in jail and asked to pay compensation of SEK 120,000 to the victim.

He is sentenced simultaneously for another theft, property damage, and violent resistance in connection with a previous police intervention in which he spat and kicked the intervening policemen.

The court also ordered that Shhada should be deported to his home country of Syria and will face a five-year repatriation ban.

The accused and the prosecutor both appealed against the Ångermanland district court decision in the Court of Appeal for Lower Norrland. The prosecutor sought harsher punishment for the accused. He appealed that Majd’s repatriation ban is extended to ten years.

The Court of Appeal for Lower Norrland increased Majd’s nine-month detention to one year and four months but overturned the Ångermanland district court’s deportation decision.

The court ruled that because Majd Shhada, who arrived in Sweden as a 17-year-old, would shortly “become a parent,” and risks military service in his home country, he cannot be repatriated. “He will be conscripted into war or killed if he is deported there”, ruled the court adding that therefore the Syrian violent criminal is allowed to remain in Sweden. 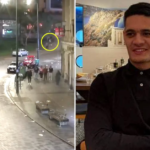 Home » World » Swedish court revokes deportation of Syrian criminal who trafficked and assaulted a woman, saying he may get killed in Syria