January 31, 2022 – A new study from the non-profit Angus Reid Institute offers insight into just how widespread the Omicron variant of COVID-19 may be in Canada.

These latest data estimate that approximately one-in-five households (21%) have had at least one case of COVID-19 positivity since December 1, 2021. A considerable portion of these positive tests (36%) – self-reported by respondents in this survey – came just after the holiday season, in the first two weeks of January, while 42 per cent occurred in December.

These data also estimate the incidence of COVID-19 among individuals during that same period. Overall, 9 per cent of Canadians saying they have received a positive test – either at home or at a testing center – for COVID-19 since December 1.

ARI estimates that additional five per cent of Canadians – at least – have been infected during that period, based on an analysis of the number of self-reported symptoms, and the positivity rate among those with similar symptom profiles who were tested.

Notably, this 14 per cent aligns closely with the number of Canadians who say they are “almost certain” that they have had COVID-19 in the past two months, added to those who have a positive test confirmed.

With Omicron now appearing to have peaked, many Canadians are leaning toward reducing restrictions related to COVID-19 control in Canada. A majority (54%) now say it is time to remove restrictions and let Canadians manage their own level of risk, an increase of 15 percentage points since this question was asked in early January.

The Angus Reid Institute (ARI) was founded in October 2014 by pollster and sociologist, Dr. Angus Reid. ARI is a national, not-for-profit, non-partisan public opinion research foundation established to advance education by commissioning, conducting and disseminating to the public accessible and impartial statistical data, research and policy analysis on economics, political science, philanthropy, public administration, domestic and international affairs and other socio-economic issues of importance to Canada and its world.

Part One: COVID-19 in the household

Part Three: How many have actually had COVID-19?

Part One: COVID-19 in the household

The surge of COVID-19 infections throughout December and January has reached proportions unseen through two years of the pandemic according to the official data collected by regional health authorities and provincial governments. Even with those recorded data showing record numbers of positive cases, many Canadians have slipped through the cracksdue to issues with availability of testing and test reporting.

This study seeks to estimate the infection rate in the broad population, by asking personal and household level questions about testing and COVID-19 related symptoms since December 1.

The Angus Reid Institute asked Canadians how many people in their household – including themselves –received a positive test during this time. Overall, 20 per cent of households have received at least one positive test for an adult – 18 years of age or older.

In addition to this, five per cent of respondents in this survey say they have had at least one child (17 or younger) test positive for COVID-19 (see detailed tables).

Aggregating these data – adding together the households who have experienced at least one person testing positive, whether adult or child – it is estimated that approximately 21 per cent of households have been home to at least one positive test since December 1. This number is highest in Quebec and lowest in Atlantic Canada:

Overall, nine per cent of Canadians say they have had a positive test since December 1, approximately one-quarter of those who have taken a test. One-in-three Canadians have had a negative test, while six per cent were unable to access a test to confirm or reject their illness hypothesis, and the rest did not seek a test:

These data offer an estimate of how widespread COVID-19 may be in Canada. A true count has been elusive, with challenges in testing during the Omicron wave. Among those who have taken a test, half have not taken one at a testing centre – the most reliable venue for official confirmation of positivity. Many Canadians have taken at home tests which rely on self-reporting for confirmation:

In addition to the home-testing factor, in some parts of the country Canadians simply are not being tested at the same level as others. This has been a particular, though not altogether unique, challenge in British Columbia. In B.C., just one-quarter of adults say they have been tested – by far the lowest number in the country. Eight per cent of residents in both B.C. and Ontario say that they have wanted to take a test but been unable to access one:

With public tests less available some regions, many have relied on private tests, which come at personal expense. This likely helps to explain a significant divide in testing across household income levels:

Among those who say they tested positive, two-in-five (42%) received this result in December. Notably, a considerable portion – 36 per cent – tested positive in the two weeks following the holidays, in the first half of January. One-in-five received a positive result within the past two weeks:

Public health officials have cautioned that though Omicron may be causing less severe outcomes than the previous Delta variant, it should not be referred to as “mild” because the relatively higher infection rate may still overwhelm the healthcare system. Canadians who have tested positive are divided between saying their symptoms were minor and ‘serious but manageable’. Nonetheless, hospitalisation rates have also reached a two-year peak in recent weeks:

Part Three: How many have actually had COVID-19?

Many Canadians have endured symptoms that may or may not have been COVID-19 during the past two months. This has led some to assume that they have contracted the virus in absence of a positive test result. In some provinces, residents have been told to assume that any illness they experienced was Omicron. With this in mind, ARI asked residents if they believe they have had COVID-19 since December 1 based on their own symptoms.

In addition to the nine per cent of Canadians who say they have had a positive test, four per cent say they are almost certain that they have had COVID-19 in that period (see detailed tables).

Comparing symptoms between the groups

Symptoms between those who tested positive and those who are near-certain that they were infected are remarkably similar. The Angus Reid Institute asked all respondents if they had experienced any number of ten different symptoms that could be related to COVID-19 over the past two months (see questionnaire here). The most common symptoms for both the positive and the near-certain were runny nose, body and head ache, sore throat, and fatigue:

Four-in-five of those who have had a positive test report experiencing at least four COVID-19 related symptoms within the past two months. This number increases to 86 per cent among those who have not had a test but are near-certain that they had COVID-19.

There are others, however, within this analysis who have not been tested for COVID-19 but have nonetheless presented symptoms since December 1. Using the benchmark of having at least four symptoms that are associated with COVID-19, ARI seeks to estimate the incidence within this untested population. Shown below:

Among the sample of 1,688 respondents, 437 have had at least four symptoms since December 1 – a key correlation with COVID-19 positivity in this study. Among those who were at least quadri-symptomatic, 257 individuals were tested – 46 per cent of whom tested positive for COVID-19.

The resultant population of those with four or more symptoms who were not able to be tested is 179 individuals. Applying this same proportion of positive tests (46%) to the untested population, a crude but nonetheless valuable estimate of total infection can be projected. This yields 82 more individuals in addition to the 154 confirmed positive cases, for a total estimated positivity of 14 per cent of Canadian adults. Note that even among those who tested positive, symptoms were not always overwhelmingly clear. This suggests that asymptomatic infection could increase this total even higher than 14 per cent. Estimates of asymptomatic infection with Omicron have been varied but are estimated to be considerably higherthan previous waves.

For those who are relatively confident that they have not had COVID-19 in the past two months, the expectation for most is that the illness would be mild or flu-like if they were infected. That said, for a key portion of the population – 13 per cent, including 20 per cent among those 65 years of age and older – the worry is that illness would come with serious complications:

If Omicron cases have indeed ebbed, it has many Canadians asking what is next. Vigilance is the request from public health officials – though plans for vaccination proof have begun to diverge, with some provinces removing requirements and restrictions. The public sentiment appears to be moving in the direction of opening up communities. Indeed, in the past two weeks the number of Canadians saying they would like to see restrictions ended has risen by 15 percentage points, to a majority (54%):

These sentiments are subject to some considerable division across the country. At least 34 per cent in every region disagree with this idea, but a majority in every region other than Atlantic Canada feel the time is now to open things up:

The lone majority-dissenting age and gender group on this question are women over the age of 54. At least half of other cohorts – led by 35- to 54-year-old men – say restrictions should end:

The Angus Reid Institute conducted an online survey from Jan. 27-28, 2022 among a representative randomized sample of 1,688 Canadian adults who are members of Angus Reid Forum. For comparison purposes only, a probability sample of this size would carry a margin of error of +/- 2.5 percentage points, 19 times out of 20. Discrepancies in or between totals are due to rounding. The survey was self-commissioned and paid for by ARI. Detailed tables are found at the end of this release.

For detailed results by age, gender, region, education, and other demographics, click here.

To read the full report, including detailed tables and methodology, click here.

For detailed results by certainty of having COVID-19 infection, click here. 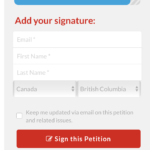 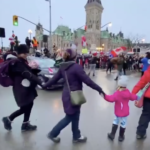