What they don't say is the polio virus found circulating today is caused from the Polio vaccinations.

All children aged one to nine in London are to be offered a dose of the polio vaccine after more of the virus was found in the city’s sewers.

The virus has also been found in lower concentrations in areas adjacent to the Beckton catchment area to the south (immediately below the Thames) and to the east of Beckton.

However, it is not clear whether the virus has established itself in these areas or if the detections are due to people from the affected area visiting these neighbouring areas.

There have been no confirmed cases of polio, and the Joint Committee on Vaccination and Immunisation (JCVI) has said the risk to the public is low.

The NHS will contact parents when it is their child’s turn to come forward for a booster or catch-up polio dose. It will start in areas where the virus has been detected and where vaccination rates are low, followed by a rapid rollout across the rest of the London boroughs.

Vaccine uptake in London is already lower than in the rest of the country – at 90% having the correct number of vaccines, compared to 95% nationally.

The UK Health Security Agency declared a national incident in June after traces of the virus were found during routine surveillance at the Beckton Sewage Treatment Works.

It is normal for one to three “vaccine-like” polioviruses to be detected each year in UK sewage samples, but they have always been one-off findings.

The recent discovery, however, has seen the virus detected in a number of surveillances of the sewage.

Only a few of the samples had sufficient mutations to be classified as vaccine-derived poliovirus (VDPV2). However, VDPV2 is of greater concern as it behaves more like naturally occurring ‘wild’ polio and may, on rare occasions, lead to cases of paralysis in unvaccinated individuals.

Dr Vanessa Saliba, consultant epidemiologist at UKHSA said: “Polio is a serious infection that can cause paralysis but nationally the overall risk is considered low because most people are protected by vaccination.

“The last case of polio in the UK was in 1984, but decades ago before we introduced the polio vaccination programme around 8000 people would develop paralysis every year.

“It is vital parents ensure their children are fully vaccinated for their age. Following JCVI advice all children aged one to nine years in London need to have a dose of polio vaccine now – whether it’s an extra booster dose or just to catch up with their routine vaccinations. It will ensure a high level of protection from paralysis. This may also help stop the virus spreading further.”

Health secretary Steve Barclay said on Twitter: “Whilst no one has been diagnosed with polio in the UK and the risk remains low, I’m accepting the advice from the JCVI to offer children aged 1-9 in London a booster. Areas where it’s been detected will be first.”

What is polio and how does it spread?

Polio is a contagious virus that can be transmitted through coughs and sneezes, but also through food, water, or objects that have been in contact with the faeces of someone infected with it.

It has flu-like symptoms, including: a high temperature, extreme tiredness, headaches, vomiting, a stiff neck and muscle pain. These usually last for ten days, but can result in more serious symptoms – and is potentially life threatening.

It mainly affects children under the age of five, although it can also impact unvaccinated adults.

The virus has been eradicated in most parts of the world due to a successful global vaccination programme, but it is still found in Afghanistan, Nigeria, and Pakistan.

Vaccines are given to children at eight, 12 and 16 weeks with booster doses administered at three years, four months and again at aged 14. The new vaccine will be in addition to the childhood immunisation programme.

All five vaccines are required to be fully protected against the virus. 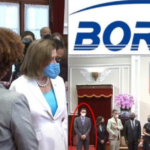 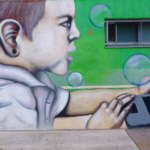 Home » World » What they don’t say is the polio virus found circulating today is caused from the Polio vaccinations.