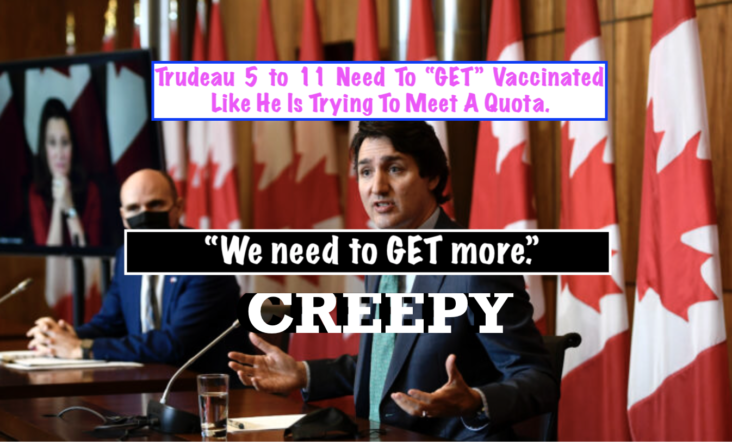 Trudeaus language around vaccinating the children sounds like he is meeting a quota. WE NEED TO GET MORE

Prime Minister Justin Trudeau is urging children to get vaccinated as he tried to speak to them directly during his press conference on Wednesday.

Trudeau said 45 percent of children aged 5 to 11 have been vaccinated across the country and “We need to get more.”

Vaccines have shown limited and waning efficacy in stopping transmission, especially with the highly mutated Omicron variant, and children have not been demonstrably seriously affected by COVID-19.

Quebec data, for example, reports 0.0 percent of total deaths occurred in the under 20 years of age.

Other than addressing children, the main topic of interest during the press conference was Quebec’s planned tax on the unvaccinated, which Trudeau refused to take a position on, citing lack of details.

Trudeau was also asked to comment on the Conservative Party’s allegation that he has been “normalizing lockdowns.”

Trudeau responded that his government has worked in many different ways to get people to vaccinate, including messaging and mandates.

“Trying to pretend that rapid testing, or testing in general is as good as getting vaccinated is simply irresponsible,” Trudeau said. “Mr. O’Toole is more focused on appeasing the anti-vaxxers within his own caucus than he is on protecting Canadians and certainly than on supporting frontline workers.”

The prime minister also attacked O’Toole’s previous declaration that the unvaccinated should be accommodated, saying it’s “exactly the wrong thing” for a debate to still be brought forward by the Conservative Party on the issue of mandates.

Health Minister Jean-Yves Duclos also participated in the press conference and stressed on a few occasions that the key word to define vaccine mandates is “benevolence.”

“Both the language and the actions are there and designed to protect people,” he said.

“No one I believe is thinking or certainly speaking of forcibly physically vaccinating people in Canada.”

Duclos also said mandates are useful in increasing uptake, saying the vaccination rate increased six to 10 percent because of them.

The health minister also addressed the status of the approval process for therapeutics, saying the process is moving swiftly and that an announcement would be made “very soon.” Duclos said Canada has already secured 10 million doses of the Pfizer antiviral drug.

The issue of new vaccines such as Novavax and others for which Canada has a contract was also raised, but Duclos did not mention a timeline, only saying they’re undergoing a “swift, efficient, and rigorous assessment on both the efficacy and safety.”

Noé Chartier
Follow
Noé Chartier is an Epoch Times reporter based in Montreal. 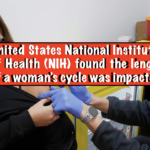 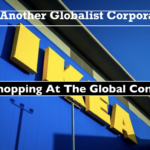 Home » Politics » Trudeau Tells Children to Ask Parents for Vaccination. “We need to get more.”