Gov Ron DeSantis asks the grand jury to investigate whether Floridians were MISLED by COVID shot firms — as he compares vaccine makers to opioid companies.

Florida Gov. Ron DeSantis has announced his plans to probe ‘any and all wrongdoing’ with respect to the Covid vaccines.

The Republican – who has long been a critic of lockdowns, masks and vaccine mandates – plans to petition the state’s Supreme Court to convene a grand jury to investigate how the shots were rolled out and marketed.

He made the announcement following a roundtable with Florida’s controversial Surgeon General Joseph Ladapo and a panel of scientists and physicians, in which they criticized Covid vaccine makers for not sharing data with independent experts.

DeSantis – who is expected to run for President in 2024 – appeared to compare the rollout of the vaccines to America’s opioid epidemic, saying Florida recently ‘got $3.2 billion through legal action against those responsible for the opioid crisis. So, it’s not like this is something that’s unprecedented.’

‘We’ll be able to get the data whether they want to give it or not,’ DeSantis said. ‘In Florida, it is illegal to mislead and misrepresent, especially when you are talking about the efficacy of a drug.’

Ladapo – who DeSantis have highly praised since taking the job in September 2021 – has been highly criticized for a report earlier this year which claimed the mRNA Covid shots significantly raises young men’s risk of dying from heart conditions.

That report was widely denounced by the scientific community who said it contained major statistical flaws. But Florida has been broadly praised for its handling of the Covid pandemic – when the state took a hard stance against masks, lockdown curbs and vaccine mandates. 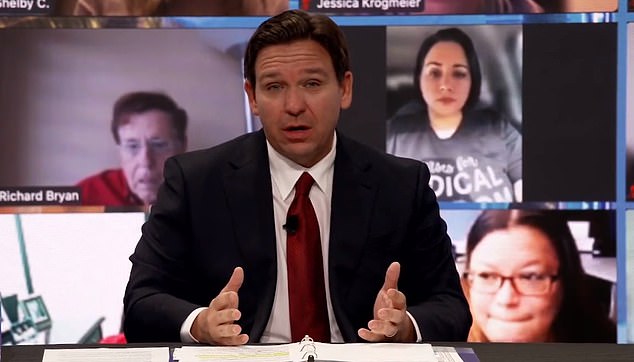 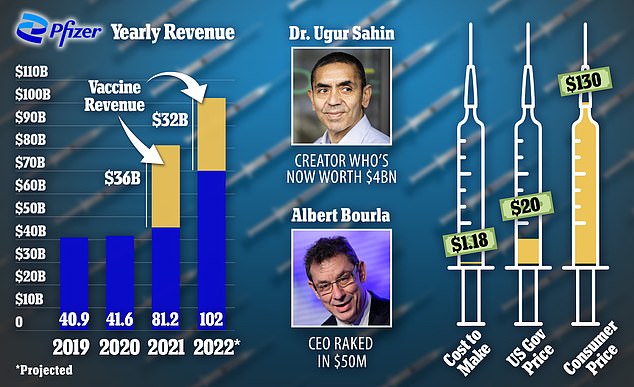 Pfizer is charging $130 for its COVID-19 vaccine  – a 10,000% mark-up from the estimated $1.18 it costs them to develop a single dose of the vaccine. The firm was charging the US government around $20 per shot but rose prices in an effort to make up for poor demand for the jabs. It is forecasted to rake in over $100billion in revenue this year, and brought in $81.2billion last year. These figures well clear the $40billion per year it was earning the years prior. Pfizer CEO Albert Bourla has earned $50million in compensation over the past two years, while BioNTech found Dr Ugar Sahin is now a billionaire.

Dr Ladapo was critical of the Covid vaccines during the roundtable, saying their ‘risk [of side effects] is much higher… not in the same ballpark as other vaccines’.

DeSantis also announced that Florida is creating a Public Health Integrity Committee, which may operate as a replacement to the Centers for Disease Control and Prevention (CDC).

DeSantis has repeatedly clashed with the federal health agency over masks, vaccines, and the reopening of cruise liners in the state.

It is unclear whether the anti-vaccine stance will affect Gov DeSantis’ presidential bid. A poll today indicates he has overtaken Donald Trump and Joe Biden as the favorite for the 2024 election.

‘Today, I’m announcing a petition with the Supreme Court of Florida to enpanel a statewide grand jury to investigate any and all wrongdoing in Florida with respect to Covid vaccines,’ DeSantis said during the roundtable held Tuesday.

DeSantis did not clarify what the probe was searching for, but implied vaccine manufacturers had misled the public.

A Pfizer spokesperson told DailyMail.com: ‘Regulatory agencies across the globe have authorized the use of our COVID-19 vaccine.

‘These authorizations are based on robust and independent evaluation of the scientific data on quality, safety and efficacy, including our landmark phase 3 clinical trial.

Moderna did not immediately reply to a DailyMail.com request for comment.

Dr Ladapo made headlines in March when he recommended healthy children not receive the Covid vaccines, making Florida the first and only state to officially oppose the shots.

His decision was backed by the Governor, who said at a roundtable earlier this year: ‘The data that’s coming in on this is showing for healthy kids very little benefit in terms of what the vaccine is doing and that’s weighed against the fact that they’re at very, very low risk. 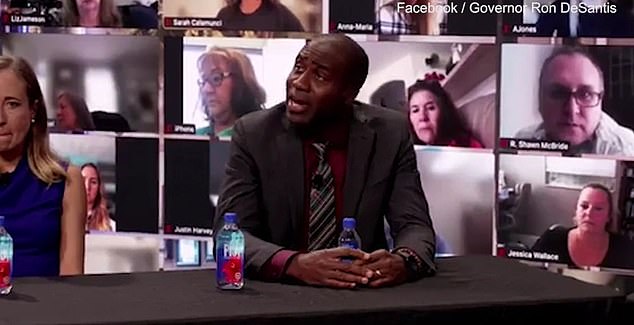 Dr Ladapo was critical of the Covid vaccines during the roundtable, saying their ‘risk [of side effects] is much higher… not in the same ballpark as other vaccines’

‘Individuals can make their own decision… but I think the data is in line with what the surgeon general recommended.’

The pair cited the tiny risk children face from Covid. Minors in the US make up around 0.01 percent of the nation’s 1million deaths, according to CDC data.

The move was widely criticized by local and national health experts, including by the American Academy of Pediatrics.

DeSantis doubled-down in June, saying his state would not launch any programs to help rollout the shots to toddlers or infants.

The Pfizer vaccine is authorized by the Food and Drug Administration for children as young as six months old.

Dr Ladapo took the criticism of the shots a step further in October, when he recommended men aged 18 to 39 not receive the vaccines either.

The surgeon general cited a study that found men of that age who received the shot suffered an 84 percent increased risk of cardiac death.

Some experts dispute these findings, though, and say the study had major statistical flaws.

One of the main problems is that it did not weed out people who tested positive for Covid — which itself can cause heart inflammation and other issues.

These shots have fallen out-of-favor with Americans in recent months.

Demand for the vaccines has cratered in recent months, and bivalent Covid shots rolled out by both Pfizer and Moderna have seen little uptake.

The CDC reports that only 42million Americans have received the shot since they became available at the end on August – only 13.5 percent of the eligible population.

This lack of demand, and because the government will no longer but the shots in bulk and provide them to Americans for free, spurred Pfizer to increase its price for the shots to $130 per dose starting sometime next year.

The federal government was previously spending around $20 per each dose procured.

Alongside the probe into the vaccines, Gov DeSantis also announced a new public health committee to rival the CDC.

‘It’s not serving a useful function.’

He said that the CDC has ‘squandered any type of confidence or good-will that people would have’ in them.DeSantis blamed the CDC for masks in schools and other Covid policies he believes were improper.

The Public Health Integrity Committee will be made up of expert researchers gathered by Dr Ladapo.

Their role will be to critically asses guidance from the CDC, FDA and the National Institutes of Health.

Gov DeSantis has remained a staunch rival of the CDC, famously clashing with the agency throughout the pandemic.

In June of last year, he clashed with the agency over vaccine and mask requirements on cruise ships that were setting sail from the state.

A federal court ruled that the CDC did not have the right to enforce a mask or vaccine mandate on the ships in a major win for his administration.

Later in the same month, he issued an executive order barring school mask mandates in Florida – in a direct refutation of CDC guidance. 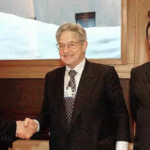