Despite the Ottawa Police briefly raising the possibility of a military intervention to clear a stubborn holdout of Freedom Convoy truckers blockading their downtown, the Canadian Armed Forces have been quick to say they will be doing no such thing . A spokesperson for the Minister of Defence told the Wall Street Journal on Thursday, “The Canadian Armed Forces are not involved in law enforcement in this situation, and there are no plans for such CAF involvement.”

Prime Minister Justin Trudeau also said Thursday that a military response is “not in the cards right now.” “One has to be very, very cautious before deploying military forces in situations engaging Canadians,” he said. (First Reading would also recommend caution before deploying the military against non-Canadians.)

There have only been two prior incidents in modern times of the Canadian military being called in to quell civil unrest. The first, the 1970 October Crisis, actually worked great at stamping out Quebec separatist terrorism. But the sight of armed soldiers detaining even peaceful Quebec nationalists en masse has always been a mark on the legacy of then-prime minister Pierre Trudeau. The second, the 1990 Oka Crisis, had a much more checkered legacy . The military did eventually compel a Mohawk-led protest to stand down their blockade of a disputed golf course expansion, but the whole thing was so messy it’s mostly become a template for what not to do. The experience of Oka is arguably a key reason why Canadian law enforcement is hesitant to bring the hammer down on blockades of any kind – even when they completely seize the country’s rail lines for days on end.

Anyways, all this military talk started only because Ottawa Police chief Peter Sloly said Wednesday “there may not be a policing solution to this demonstration” and that “ we’re looking at every single option, including military aid to civil power .”

Freedom Convoy still refuses to leave until Ottawa meets their not tremendously realistic demand of ending all COVID strictures (even the ones that Ottawa didn’t impose). And thus Downtown Ottawa effectively remains closed, with businesses shuttered (including the 200-store Rideau Centre) and police urging traffic to avoid the core. Thus far, aside from arresting the occasional violent protester, the primary law enforcement response has been the issuing of traffic tickets , which police said would continue daily.

Meanwhile, Torontonians are worrying that their downtown will be the next to fall victim to an invasion of big rigs that refuse to leave . So far, the only evidence of a Toronto demonstration is a series of flyers circulating online calling for a convoy to blockade the Ontario Legislation Assembly starting on Saturday, although it’s worth noting that’s exactly how Freedom Convoy started. Rather than attempt to deter such a thing, Ontario Premier Doug Ford simply asked them to be peaceful. “If people want to come down and protest, God bless them,” he said .

Freedom Convoy is technically polling higher than the Liberal Party of Canada right now . A new Abacus Data poll found that 32 per cent of Canadians “have a lot in common with the protesters and how they see things.” That’s not a lot, but the latest Nanos poll had the Liberals polling at just 28.2 per cent if an election were to be held tomorrow. Another interesting takeaway from the Abacus Poll? Of Green Party supporters, 57 per cent are on board with the truckers. 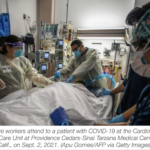 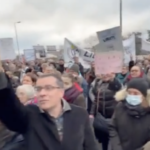 Home » Canada » FIRST READING: Military tells Ottawa to find someone else to evict the truckers