It is definitely not normal for young athletes to suffer from cardiac arrests or to die while playing their sport, but this year it is happening. All of these heart issues and deaths come shortly after they got a COVID shot.

Update 10 Dec – 14 Dec: Added CJ McCollum, Adam Bounds, Stephanie Gard, Drake Geiger, chart updated, Demaryius Thomas, Brock Vogel, Keanu Breurs, Chuck “Kali Muscle” Kirkendall, Pavel Karpf, Lise Vidal, Eric Turner, Michele De Vecchi. Thanks to readers checking, thankfully, Sage Canaday did not die – he was in bed due to pneumonia and blood clots, and then overnight stay in hospital which he says is not vax related, but which started to happen a short time after his second Pfizer shot. His entry remains below, but with the red death marker removed. Ivan Douglas, former Buckeyes football player changed from affected by vax to May or may not, and Dead, because no proof yet he was vaxed, but apparently caught COVID.

It is definitely not normal for young athletes to suffer from cardiac arrests or to die while playing their sport, but this year it is happening. All of these heart issues and deaths come shortly after they got a COVID shot. While it is possible this can happen to people who did not get a COVID shot, the sheer numbers clearly point to the only obvious cause.

The so-called health professionals running the COVID shot programs around the world keep repeating that “the COVID shot is a normal vaccine and it is safe and effective.”

So in response to their pronouncement, here is a non-exhaustive and continuously growing list of young athletes who had major medical issues in 2021 after receiving one or more COVID shots. Initially, many of these were not reported. We know that many people were told not to tell anyone about their adverse reactions and the media was not reporting them. They started happening after the first COVID vaccinations. The mainstream media still are not reporting most, but sports news cannot ignore the fact that soccer players and other stars collapse in the middle of a game due to a heart attack. Many of those die – about 50%.

Sidelined Athletes with “Illness” Not Included in This Report

Many sports teams now have multiple sidelined players. There are dozens of them. The teams and Big Media are hiding this, thinking nobody will notice. These damaged players will not be shown in this report if they are reported only as “illness” but they would be worth tracking, because it is not normal to have so many. Their immune systems are likely to have been compromised by “something,” so they will be open to many things they would normally have been able to shrug off. We leave it to others to track these – we have our hands full handling the investigations for this list, going back in time trying to find new information that wasn’t available before, and making minor corrections as they are discovered. It will all come out eventually. 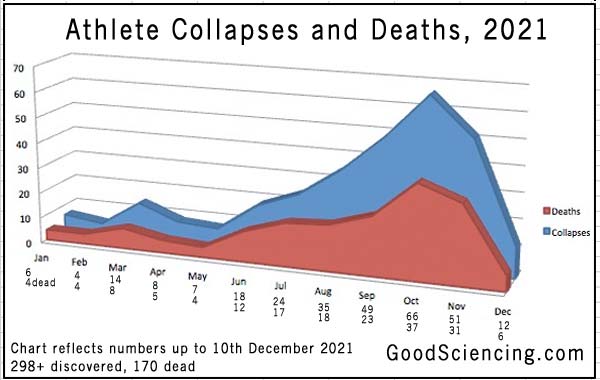 Here is a non-exhaustive list of injuries reported. Most were cardiac arrest.

Athletes Collapsing all Over the World

This story will grow over time, as new information is added. If you have proof of information that we don’t already have, or if you have a correction, please send it through our contact form, with as much information as possible. Useful information would be the person’s name, age, what happened to them, if they had the COVID shot(s), date of death, link to any news story.

Special thanks to readers who have provided corrections, found errors that we missed, or provided new information we didn’t know about. It is now a real team effort and we appreciate it.

For the skeptics who believe this is normal, feel free to repeat the following 18 words, after reading each record or name in this list.

Repeat This After Reading Each Line

NOTE: No reports below this point are included in the counts in the Headline

NOTE: No reports below this point are included in the Vaccine counts in the headline because of insufficient documentation or other causes are more likely.

No documentation found yet

Investigations in progress. No news media documentation found in this section so far. Some names may be spelled incorrectly. Dates may be wrong. We found correct details for more than 10 like this so far. Now we are adding them to this area of the list, but not counting them in the headline total, until documentation is found. Any assistance would be appreciated.

May Or May Not Be Vax Related

There is insufficient information to decide if any of these collapses or deaths are related to COVID vaccinations. More investigation is needed. Any help would be appreciated because keeping with the ongoing investigations isn’t easy. These are listed here because they appear in some lists as vax-caused, but we believe there is either currently insufficient information to decide or other explanations seem to overrule vax-caused, such as cancer.

Most Likely Not Vax Related

These collapses or deaths are most likely unrelated to COVID vaccinations.

09/12/20 France
Dimitri Linard, 33, Strasbourg FC footballer, collapsed during a game with Lyon. He has played at least 10 matches in 2021, after his collapse. It seems highly unlikely his 2020 collapse was related to vaccine.  News Story

12/12/20 Florida, USA
Keyontae Johnson (21), University of Florida basketball star. Hospitalized after collapsing face first four minutes into the game against Florida State. Released from hospital. Unlikely to be vaccine-related because it was December 2020, a time when he was unlikely to have been able to get the shot.  News Story

16/03/21 Moscow, Russia
Timur Faizutdinov (19), was playing for Dynamo St. Petersburg junior team in a playoff game against Loko Yaroslavl when he was hit in the head by a puck. He collapsed and then died in hospital.  News Story

03/12/21 Lancaster, UK
Kortney Hause (26), Aston Villa footballer crashed his Lamborghini into a school fence after losing control of the vehicle on a wet road. He was dazed but uninjured and nobody was hurt. He had a record of speeding and being late.

Thanks to Many Contributors

Many people are contributing to this, some indirectly by reporting to Telegram groups and other websites. There are many duplicates and in some cases, people report things we’ve had for months, but every report helps because sometimes there is a small piece of information we didn’t have before, such as a date, an autopsy report, a name spelling, or a report from months ago that never made it into a news story. That was the case with Chuck “Kali Muscle” Kirkendall. Helpful websites include DVDbeaver,

That is the current list … all these athletes have suffered heart problems after COVID shots. At the time of initial writing, 28 died. That was not normal, but then, 10 days later, 56 deaths were listed, and the numbers are climbing. Any other real vaccine would have been pulled off the market long before now. The media would be asking questions. They would be pressuring governments. But they are not. And governments are continuing on and running TV and radio and newspaper ads encouraging people to get their 1st, 2nd, 3rd, 4th shot.  Perhaps that is why the mainstream media are saying little, because they are collecting government money for ads?

The deaths and severe reactions will continue until so many people die that it becomes obvious the shot is 10x to 100x worse than the virus it is supposed to treat.

These athletes are the canaries in the mine that warn us of imminent danger. They are being hidden so the people who are not paying attention do not see the warning.

We only see the athletes because they are in the spotlight. The nobodies – i.e. most citizens – do not make the news.

Why are athletes collapsing? 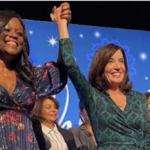