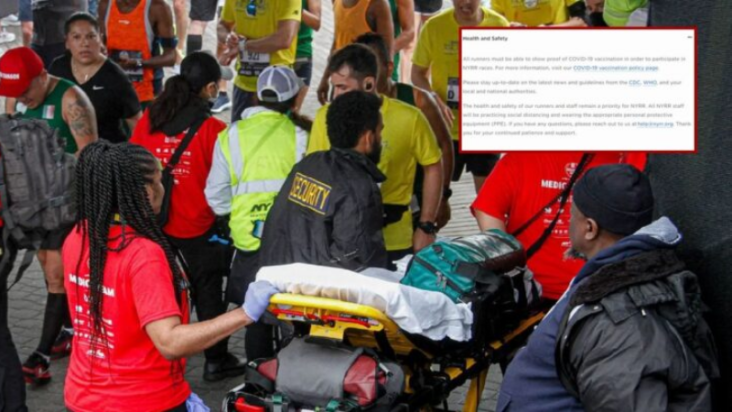 It is an absolute fact that all the runners who participated in the Brooklyn Half Marathon on Saturday declared that they had been vaccinated for Covid-19. Whether or not that is relevant to the unprecedented number of runners who collapsed or even the man who died during the event is another story.

Saturday’s running conditions were unusually hot and humid, even at 9 a.m. when the participant David Reichman is reported to have died shortly after collapsing after the finish line.

The New York Post reported that Reichman, a 32 year-old man, collapsed “after suffering from possible cardiac arrest, according to event organization New York Road Runners club and the NYPD.”

“The 22,000-runner race — from the Brooklyn Museum through Prospect Park to the Coney Island boardwalk — was held on an unseasonably hot and humid day,” the Post added. “The temperature at 9 a.m. at Coney Island was already 70 degrees with 83% humidity, according to Fox Weather.”

According to The Daily Mail: “Sixteen people who participated in the 13.1 mile race were taken to a hospital, according to the FDNY. Five suffered serious injuries, eight people had non-life-threatening injuries and four people sustained minor injuries.”

The Brooklyn Half Marathon requires that participants are in peak physical condition and must conform to a rigorous pacing schedule.

Members of the NYRR Pace Team will be on hand to guide participants toward specific goal times over the 13.1 miles,” the RBC Brooklyn Half website states. “Pace Team members will lead groups at various paces between 6:06 per mile and 13:45 per mile (between a 1:20:00 finish and a 3:00:00 finish).”

All Brooklyn Half participants must declare that they have been vaccinated for Covid-19, the official websites makes clear. 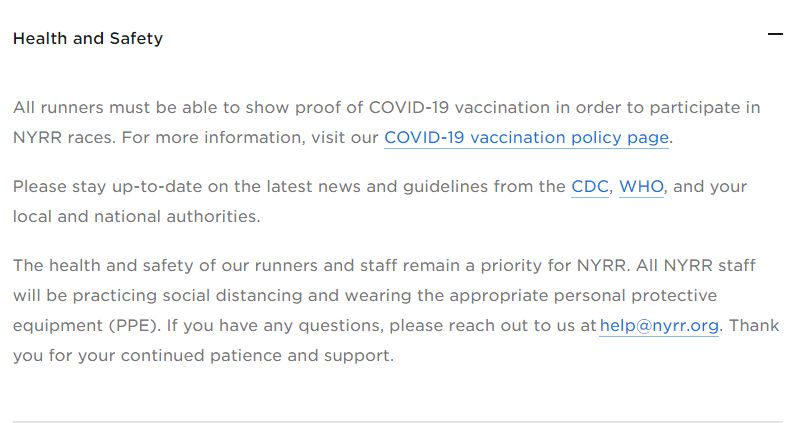 “All runners must be able to show proof of COVID-19 vaccination in order to participate in NYRR races,” the website states. “For more information, visit our COVID-19 vaccination policy page. Please stay up-to-date on the latest news and guidelines from the CDC, WHO, and your local and national authorities.”

“The health and safety of our runners and staff remain a priority for NYRR,” the Brooklyn Half organizers add. “All NYRR staff will be practicing social distancing and wearing the appropriate personal protective equipment (PPE). If you have any questions, please reach out to us at help@nyrr.org. Thank you for your continued patience and support.”

The Brooklyn Half organizers did not require that the runners wear masks. Covid-19 vaccines have been proven to lead to rare, but elevated risks of side effects; there are also reported heart inflammation side effects from Covid infection itself.

An Oxford University study earlier showed that the risk of myocarditis, a form of heart inflammation, is greater from getting ‘vaccinated’ with certain mRNA shots than from contracting the virus itself. The study was originally published in Nature in December.

“Our findings are relevant to the public, clinicians and policy makers,” the researchers note. “First, there was an increase in the risk of myocarditis within a week of receiving the first dose of both adenovirus and mRNA vaccines, and a higher increased risk after the second dose of both mRNA vaccines,” the study concluded.

Saturday’s death was the first fatality in the Brooklyn Half race since 2014, which was accompanied by an unprecedented 16 runners collapsing or suffering from health issues. It is unknown how many of the Brooklyn Half runners’ suffered from heart complications on the unusually hot and humid day in the northeast for mid-May.

However, there is a disturbing trend of athletes facing an alarming number of heart problems, despite being in peak physical condition and otherwise statistically not at high mortality risk from Covid-19. The coronavirus typically impacts those who have underlying health conditions, are clinically obese, and/or are elderly.

It is important to scrutinize stories about athletes collapsing or dying at a young age. There is a lot of misinformation about the subject, which stems in part from unknowns about patients’ medical histories and conflation of health conditions.

A sample of relevant stories about athletes that recently suffered from heart conditions that can be independently corroborated are listed below:

It is unknown if specific players are vaccinated, because medical histories are private information and cannot be divulged without patient authorization. But U.S. sports leagues and European leagues have compelled athletes to be vaccinated in order to participate, making vaccination highly likely.

“[L]eagues such as the NBA, NFL and MLS have rates greater than 90%, with the NHL and WNBA at over 99%,” ABC News reported about Covid vaccinations in October. Meanwhile, Sports Illustrated reported in December that “68% of the [Premier League’s] players have been double vaccinated, with only 81% of them only having at least one jab.”

While it is impossible to know if the Brooklyn Half runners’ health conditions are tied in any way to Covid vaccination, the unprecedented number of runners’ collapses will draw more scrutiny to the necessity of vaccinating athletes with mRNA shots that do not stop the spread of the coronavirus in any significant way and only provide extremely marginal benefit for young people, particularly those with prior infections and subsequently, natural immunity. 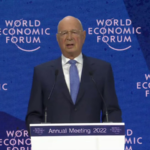 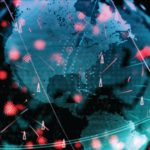