This Globalist Want To Be Dictator Of Canada Is Breaking Our Rights and Freedoms Over a Plandemic.

Are we so fucking week we are just going to watch this happen from Trudeau the Cultural Marxist? Honestly our forefathers died for our rights. And we as a Generation just going to sit back and watch this unfold? Where are all the Brave men going to be for the less fortunate and more vulnerable. Many women are worried, families that have seen this before in history.

BUT WHERE ARE THE GOOD COPS – THE JUDICIAL SYSTEM – THIS IS FRAUD – THIS IS GENOCIDE
Cultural Marxist Take Over Of Canada By Globalist Who Control Our Governments. Canadas Rule Of Law Is Gone. Te vaxxed against the unvaxxed, but it’s simply tyranny, based on a hoax. The unvaxxed may have to carry the yellow star as social outcasts, rounded up by the Gestapo, to be brought to a concentrationcamp. We have learned nothing from history, since they did exactly the same 100 years ago. Hitler called them “Dirty Jews” and now the unvaccinated are the “dirty Humans” a lower class than others, a more simply minded person that doesn’t believe in Science, but probably believes in God. And of course White Christians in Canada have less in cultural and class now so easy to dismiss as a lower than human level.

CHILDREN 5 AND UP FOR VACCINES….WTF

These “Vaccines” have killed more people than any other and all other vaccines in history. Why aren’t these people going to jail? 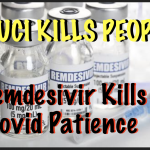