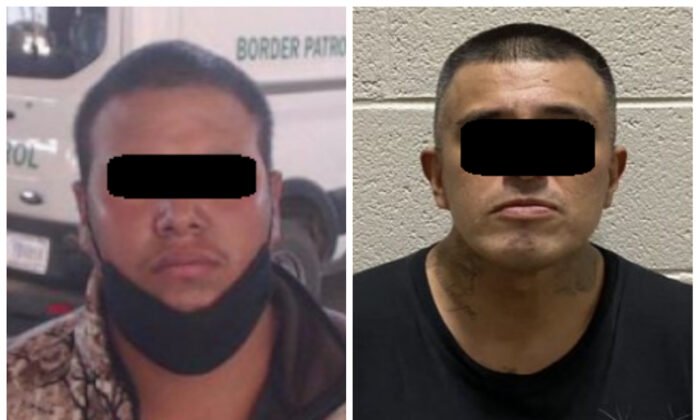 Illegal aliens found to be a convicted sex offender (L) and a felon gang member (R) by border agents assigned to the El Centro sector in California on March 24 and March 23, 2021, respectively. (U.S. Customs and Border Protection)

Border Patrol agents in California arrested two illegal immigrants who turned out to be a convicted sex offender and a gang member convicted of a felony offense.

The man from Mexico was found to have been previously convicted in May 2012 for sex with a minor out of Santa Maria, California. He was given a one-year prison sentence and five years’ probation.

The previous night, border agents assigned to Calexico Station of the El Centro Sector arrested a gang member trying to illegally enter the country around 9:25 p.m.

Record checks showed that the unnamed 44-year-old man is a member of the Sureño gang, who was convicted for felony carjacking out of Los Angeles in 1995, for which he was sentenced to four years in prison. He was later charged in 2005 with being a felon in possession of a firearm out of Bakersfield, and was sentenced to 32 months in prison. The same man was ordered to be removed from the United States in 2017.

Both men were moved to the El Centro Sector Rally Point and were processed criminally for 8 USC 1326, Reentry of Removed Aliens. They will be held in federal custody pending their respective hearings.

So far, since the start of the 2021 fiscal year on Oct. 1, 2020, El Centro Sector Border Patrol agents have arrested 13 people who are either convicted or wanted on charges of sexual offense.

Secretary of Homeland Security (DHS) Alejandro Mayorkas said on March 21 that migrants should not come through the southern border to the United States.

“Now is not the time to come,” Mayorkas told ABC News. “Do not come. This journey is dangerous. We are building safe, orderly, and humane ways to address the needs of vulnerable children, do not come.”

He blamed the influx of illegal immigrants on the Trump administration.

“Why is it especially challenging and difficult now, because the entire system under United States law that has been in place throughout administrations of both parties was dismantled in its entirety by the Trump administration,” he said. “So we are rebuilding the system as we address the needs of vulnerable children who arrive at our borders.”

Mayorkas’s message echoed President Joe Biden’s message to the outlet on March 17 when he said “don’t come over”—a message intended for people who plan to enter the United States illegally.

Some Republican members of Congress have cast blame on the Biden administration over its actions that they allege sends mixed signals to potential illegal immigrants.

Sen. Ted Cruz (R-Texas) in a statement on March 17 contended that Biden’s calls for a “halt in deportations, mass amnesty, and health care benefits for illegal immigrants” in his presidential campaign back in September 2020 had served as a signal to potential illegal aliens that “the border would be wide open” under a Biden presidency.

“And as a result, people came,” Cruz said, later adding, “This crisis is the direct result of President Biden’s radical open borders agenda.”

The number of illegal crossings at the southern border has been on the rise since October 2020. The number of arrests from October 2020 to January 2021 was 296,259, representing a 79.5 percent increase from the same period last year, according to CBP data.

In February, the CBP arrested 100,441 aliens who crossed the southern border illegally. That number is almost triple the arrests from the same month last year, when CBP caught almost 37,000 people.

Since taking offence, Biden has reversed a number of policies from the Trump administration over the border and immigration, including pausing border wall construction and announcing the removal of former President Donald Trump’s “Remain in Mexico” order for arrivals before Jan. 1, which has seen a surge in illegal aliens with children attempting to enter the country, and the Biden administration accepting unaccompanied minors, effectively reinstating the Obama-era “catch and release” policy. Adults and families are still being expelled from the United States, Mayorkas told NBC News on March 21.​

Read More
DHS Secretary: Border Is Closed but Children Won’t Be Expelled
Biden also proposed a plan to Congress on his first day in office, seeking to provide a pathway to U.S. citizenship for an estimated 11 million illegal immigrants, something he had vowed to do during his campaign. Last month, Democrats introduced a reform bill—the U.S. Citizenship Act of 2021—that closely models Biden’s proposal.

“Expectations were created that with President Biden’s government, there would be a better treatment of migrants. This has caused Central American migrants, and also from our country, to want to cross the border thinking that it is easier to do so,” he said.

The Biden administration has sent officials to Mexico and other countries to discuss options to address the increasing number of illegal immigrants traveling to the U.S. border.

Jack Phillips and Bowen Xiao contributed to this report. 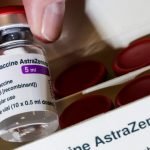 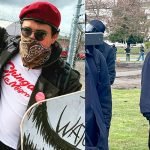