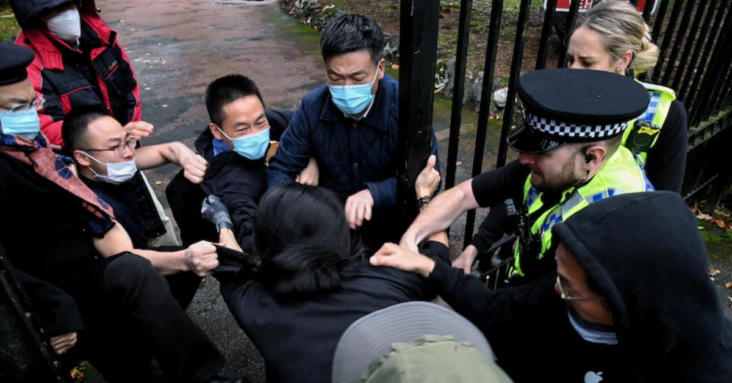 A man protesting outside the Chinese Consulate in Manchester, England, was grabbed by a group of men, dragged onto consulate grounds, and beaten.

During the melee  other protestors and with additional onlookers  tried to prevent the man from being dragged away.

British police arrived pushing the protestors back while the man was dragged further behind the consulate gates, even throwing some aiding the man to the ground.

Police slowly intervened and eventually pulled the man from his abusers,  but not before cameras captured multiple blows to his head while he lay on the ground.

A man protesting outside the Chinese consulate in the northern British city of Manchester was dragged onto the consular grounds and beaten, increasing tensions as ties between the two countries worsen.

The scuffle at the consular gates in Manchester on Sunday took place as protesters from Hong Kong demonstrated against China’s leader, Xi Jinping, who is expected to win a third term leading the country during this week’s Communist Party Congress in Beijing. Banners and posters placed outside the consulate’s entrance called for an end to the Communist Party and depicted Mr. Xi wearing only a crown and underwear.

Video footage that circulated widely online showed a group of men, presumably from the consulate, ripping up posters and dragging one protester through the consulate’s gate, where they wrestled him to the ground and beat him.

A spokesman for the Chinese consulate was quoted by the BBC criticizing protesters for hanging an “insulting portrait” of Mr. Xi at the building’s main entrance.

“This would be intolerable and unacceptable for any diplomatic and consular missions of any country,” the spokesman said, according to the BBC. “Therefore, we condemn this deplorable act with strong indignation and firm opposition.” The consulate did not immediately respond to requests for comment.

During the scuffle, Manchester police officers stepped onto consular property to separate the protester from his attackers. The police said on Monday that the officers were there to defuse the situation.

Social media is ablaze with speculation that the man seen ripping down the banner and overseeing the beating may be Consul-General Zheng Xiyuan.

British MP Alice Kearns spoke out against the attack.