Tree-changers who innocently give their hobby farm pigs leftovers could sink efforts to keep foot and mouth disease out of Australia.

Biosecurity experts fear the highly infectious animal virus will get away if illegal meat imports wind up in swine swill.

Dr Aaron Dodd from Melbourne University says professional farmers are acutely aware of risky practices but the same can’t be said of the novice brigade.

“The level of awareness among backyard or small holder pig owners is really low,” he says.

The deputy director of the centre of excellence for biosecurity risk analysis says while illegally imported meat poses the biggest risk to the country, the potential for pig owners to give that to their animals is of concern.

“We know that the importation of these products and the illegal feeding of them to pigs will be the most likely cause of an outbreak here in Australia.”

Dr Dodd says an increase in people moving to the bush because of COVID, leaves Australia exposed.

“With lots of people moving from the cities to regional areas in the last two years it is likely there is an increasing biosecurity risk as a result.

“Small holdings and backyard pig owners who are less connected to agricultural networks are thought to be more likely to engage in practices such as swill feeding, that have a high chance of accidentally introducing the virus.

“They may be less aware of what they’re responsibilities are in terms of preventing an outbreak and also what they would need to do in an event of one.”

A senate committee into Australia’s biosecurity preparedness on Wednesday heard food being brought into Australia poses the biggest risk of introducing foot and mouth.

The committee was told an outbreak in the UK in the early 2000s, which saw more than six million cows and sheep destroyed, was imported via an airline food tray.

It’s understood that leftover food was later fed to pigs.

Queensland senator Susan McDonald, whose family runs one of Australia’s largest beef cattle operations, wants a complete ban on food brought into the country by travellers.

And she questioned officials from the department of agriculture as to why one wasn’t already in place.

“Why are we not just making it very easy for our biosecurity officers and saying there is no food, you will not go hungry in Australia, you just can’t bring anything in,” she asked.

Officials said on Wednesday they are considering a ban on all food products being brought in from Indonesia by travellers, due to foot and mouth concerns.

Agriculture department secretary Andrew Metcalfe told the inquiry dealing with the disease was an evolving situation.

“There have been significant actions taken in relation to food being imported from Indonesia since the outbreak occurred and many more categories of food unable to be imported,” he said.

“We are constantly reviewing the risk factors associated with any food imports and making changes accordingly.”

Epidemiologist and managing director of AusVet Ben Maidin worked as a veterinary inspector in the UK when its foot and mouth outbreak was at its peak.

“It was a really trying time, it was very tough and it wasn’t pleasant work.”

“The policy was to slaughter infected premises and … neighbouring properties to get ahead of the disease spread.”

Mr Maidin told AAP meat brought in from Asian airports as well as swill feeding are among the greatest risks for the disease arriving in Australia.

And he agrees small landholders pose a greater threat than major piggeries.

“Most major piggeries have very tightly managed diets and pose no risk, it’s far more likely to be just small holders,” he says.

“Livestock but particularly pigs used to always be fed the leftovers from the table in the house but we realise the spread of livestock diseases are much more likely to occur when meat products are being recycled.”

A national ban on feeding food scraps to pigs, known as swill feeding, has been in place in Australia since 1975.

Dr Dodd says the fining of a traveller in July for bringing back two egg and beef sausage McMuffins and a ham croissant when returning to Darwin from Bali, serves as a timely reminder of the risk posed.

He says if that food had then been fed to animals in Australia, it could have been disastrous.

“It only takes one dodgy hamburger fed to a pig to start an outbreak.”

It’s estimated that if foot and mouth does get in it could cost Australian agriculture a staggering $80 billion.

It follows a $14 million boost to frontline measures, including funding for 18 new biosecurity officers at airports and mail centres.

Those officers won’t be deployed until the end of September, with contractors filling the gap.

Detector dogs are also in place at almost all airports with incoming flights from Indonesia. 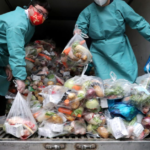