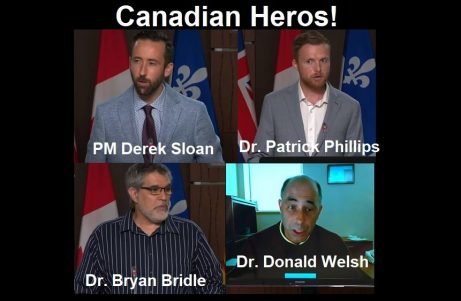 I Believe in Science, Not Political Science!

One of our many dear Canadian subscribers emailed me a link to a press conference given in Ontario yesterday at Parliament Hill.

PM Derek Sloan arranged the press conference, and invited Dr. Bryan Bridle, Dr. Patrick Phillips, and Dr. Donald Welsh to give short presentations on how good doctors and scientists are being censored in Canada, and being harassed and threatened for speaking the truth, which is not getting out to the masses.

These men are true heroes! They have put their careers and lives on the line to speak the truth about the genocide currently being carried out and the crimes against humanity over the COVID-19 response and bioweapon shots.

“I’ve consistently stood up for Canadians, where no other federal party would.”

He issued a call for whistleblowers within the medical and scientific community in Ontario to contact him. Shocking stories were told, and all agreed that their stories were not being told in either Parliament or the national media.

So he did this press conference on Parliament Hill.

Dr. Bryan Bridle then spoke, explaining how he has been slandered, harassed, and attacked with fake social media accounts put up in his name. His own colleagues have attacked him, and given out confidential medical information about his own parents. His career has been destroyed for speaking out. He says:

“I don’t recognize the country I was born into.”

Dr. Patrick Phillips was next and stated that due to the lockdowns:

He also related how on April 30th the College of Physicians and Surgeons of Ontario came out with a very “chilling statement,”  basically stating that only approved COVID measures could be discussed with patients, no proven effective early treatments like Ivermectin could be discussed, that Vitamin D is “fake” news, and they were not allowed to say anything negative about the COVID-19 shots.

Threatening to take his license to practice medicine away for promoting early treatments like Ivermectin, he was not willing to let patients die:

“There’s something bigger going on than my medical career at this point, because lives are being lost and we need to speak out.”

Dr. Donald Welsh came next and gave an impassioned talk about the death of science in Canada.

This is from our Rumble channel, and it is also on our Bitchute channel.

DR. BYRAM BRIDLE & MP DEREK SLOAN and a host of others speaking the truth about the vaccines.

Home » World » CPSO Thretens its members. This Intimidation is Not Working and Truth Will Come