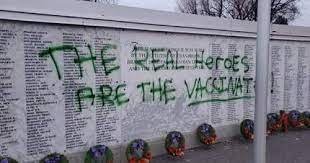 the real heroes are the vaccinated

A war memorial in Canada honoring the lives of fallen soldiers was defaced with graffiti that said, “the real heroes are the vaccinated!”

No, this isn’t the Babylon Bee.

The message was sprayed on the Cranbrook Cenotaph in Cranbrook, British Columbia before the town celebrated its veterans for Remembrance Day on Thursday.

The words, written in green paint, say, “the real heroes are the vaccinated.”https://t.co/zRIL6ednFX

Police were notified of the graffiti at 7am and city workers were able to scrube it off in time for an event later that day.

“As a community, we are beyond disappointed by the disrespectful actions of those responsible for defacing such an important monument on such an important day for all Canadians,” the City of Cranbrook posted on Facebook.

“Police said they are actively investigating and will be collecting security video from nearby buildings in the hopes they recorded the vandal,” reports Global News.

It goes without saying that people who desecrate war memorials to honor people who have been forced to undergo what is now a de facto mandatory medical procedure aren’t “heroes.”

They’re literally the scum of the earth. 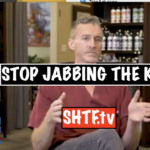 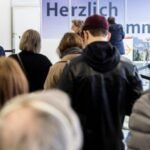 Home » Canada » War Memorial Defaced With the Words “The Real Heroes Are the Vaccinated!”