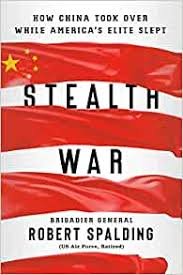 China’s desire to dominate new wireless technology poses a global threat that should be thwarted by a new, secure network, according to a former Trump administration official whose call for an enlarged U.S. government role caused an uproar last year.

China will gain a capability for mayhem and mass surveillance if it dominates advanced 5G networks that link billions of devices, retired Air Force Brigadier General Robert Spalding said in a memo that was obtained by Bloomberg News.

“The more connected we are, and 5G will make us the most connected by far, the more vulnerable we become,” Spalding, who left the National Security Council last year, said in the memo.

Spalding, who is now retired, confirmed in an interview Friday his authorship of the memo. He said he wrote it in recent days, and had circulated it to national security professionals whom he declined to identify. A plan he backed last year aroused protests from Republican regulators and lawmakers and wireless companies who said it diminished the role of private companies.

Home » child trafficking » We Are At War Right Now