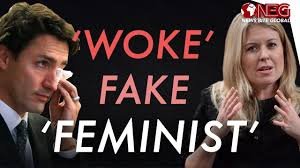 The Crime Minister of Canada is either a complete fool or a terrible thief and Lier. He has lost 700billion in office and cant explain where it is. He says he is for woman rights, but there are books out against how much of a control freak and disgrace he is twards being a feminist. In fact it goes so deep and say before his political career.

Trudeau is clawing back CERB from Canadians while Trudeau sent Big Money to CCP banks, oil companies, and telecommunications. Trudeau is a wreck, with yours and mine money. We need to get Trudeau and his liberal mob out of Canada. And what’s emerging is evidence a lot of the COVID-19 relief loot went to people who didn’t really need it, like the Chinese government. the unprecedented $240 billion the federal government handed out during the first eight months of the pandemic. When Justin Trudeau ran for office in 2015, he promised Canadians a more open and transparent government. An investigation by CBC News reveals, however, that the Trudeau government hasn’t been entirely transparent about where COVID-19 aid worth billions of dollars has gone