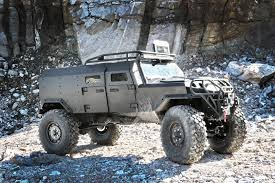 Are you a prepper? Or a survivalist? Do you want a bug out vehicle that is bullet proof (aka bullet resistant) and can drive over most obstacles on the road?

Dont forget….this has a remote controlled machine gun on a turret that they couldn’t bring to SEMA.

Also if a man can afford a $250k custom toy like this he can probably afford NFA weapons an AOWs…i.e. belt fed machine guns and explosives like 40mm grenades and howitzer canons and drones with explosives. After all we are talking SHTF no law….all of which he can use to fight his way out of town.

Plus rich people can afford to arm their friends and family. This beast wont be rolling down the street by itself unarmed. I’m sure there will be ford raptors with full auto AK47s poking out of every window as support vehicles front and rear.

If you want one then call the guys at http://www.LuckyGunnerGarage.com​ because they built an Armored Survival Vehicle and its for sale!!! Only $250,000.

All the board warrior’s out enforce on a munchy break from their video games, talkin’ mad smack like they know somethin’. Trying to come up with whatever extreme they can muster up to put this thing down, when they have nothing even remotely close. Never mind that this truck, which has axles 10x’s tougher than they’re giving any credit for, could still be far more fortified underneath, like that’s a secret.
Any fool knows if SHTF they’d jump in this thing immediately if given half an opportunity.
Everyone is an experienced extreme survival vehicle and tactics expert