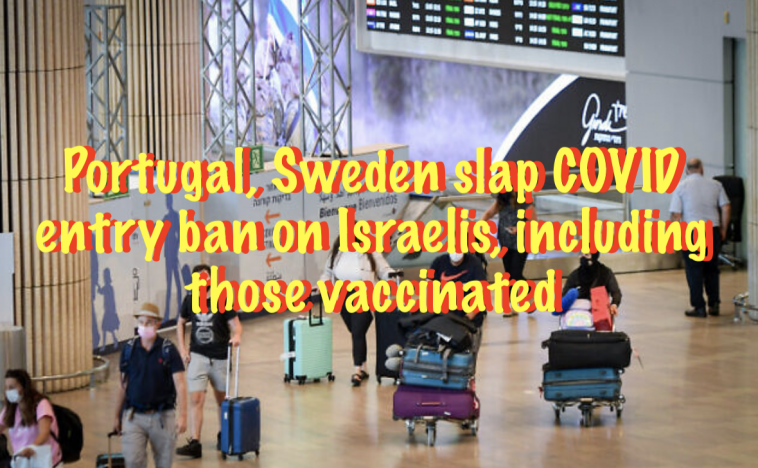 in Israel, despite the country being one of the most vaccinated countries in the world.

Portugal on Wednesday became the first EU country to ban travel from Israel due to a rise in cases. Both countries are following the EU’s recommendation to remove Israel from its list of green countries.

Interior Minister Mikael Damberg told news outlets that the sharp increases in COVID-19 cases in Israel, the United States, and other countries are the reason why they were removed from Sweden’s travel ban exemption. Despite Israel’s mass vaccination campaign, the virus has continued to spread, Damberg said.

According to a news release from the Swedish government, it will reintroduce a travel ban on Israel, the U.S., and other countries starting from Sept. 6.

“Regarding foreign citizens travelling to Sweden from the US, Israel, Kosovo, Lebanon, Montenegro, and North Macedonia as of 6 September, only those covered by another exemption from the entry ban may enter Sweden,” said the release. “This could concern foreign citizens who have residence permits in Sweden, have particularly urgent needs or are to carry out essential functions, and who can also present a negative COVID-19 test. The negative COVID-19 test result may not be older than 48 hours. This requirement applies to foreign citizens aged 18 and older, with certain exemptions.”

The Swedish government said it is following the EU’s guidelines on removing those countries from its safe travel list, and it said the directive will be revisited at a later date.

“Unfortunately, following the EU’s directive, according to which it was decided to remove Israel from the list of green countries, the Portuguese government aligned itself with [the EU’s recommendation] which prohibits entry from Israel to Portugal except for justified reasons,” Itay Mor, the head of Zionist NGO Over The Rainbow Portugal, told YNET.

Interior Minister Mikael Damberg cited the sharp increases in coronavirus infections as the reason the countries were removed from the travel ban exemption, saying that despite Israel’s successful vaccination campaign, the country is still home to large groups of unvaccinated people that have allowed the outbreak to spread.

“We are troubled by this decision, all the more so because most Israelis have been vaccinated. At this stage, the EU should have recognized Israel’s vaccination certificates,” Mor added.

On Aug. 30, the European Union removed the United States, Israel, Kosovo, Lebanon, Montenegro, North Macedonia, and others from its safe travel list. The list is nonbinding and countries are free to determine their own border policies.

The United States doesn’t allow European citizens to visit the country freely, despite appeals from the EU. The United States also extended a moratorium on cross-border travel with Canada, as well as Mexico, despite Canada having rescinded travel restrictions for Americans and permanent residents who are fully vaccinated.

Meanwhile, Israel over the weekend announced that individuals who have not received a third booster vaccine shot will not be able to use their vaccine passports.

Even though Israel is one of the most vaccinated countries on Earth against COVID-19, cases are rising. The small nation’s seven-day average for COVID-19 infections on Monday was over 1,000 per one million people, which is double the rate of numbers seen in the United States and the United Kingdom, according to Oxford University’s Our World in Data.

The Joint Committee on Vaccination and Immunisation (JCVI) on Friday said it’s taking a “precautionary approach” because children have a very low risk of getting seriously ill from the CCP (Chinese Communist Party) virus—two in a million admitted to PICU according to the latest analysis.

“Given this very low risk, considerations on the potential harms and benefits of vaccination are very finely balanced,” the JCVI said in a statement.

The Department of Health and Social Care on Aug. 28 preemptively told England’s health service to get ready to vaccinate all 12–15-year-olds in anticipation of a recommendation in favour of mass vaccination for the age group.

Pfizer/BioNTech COVID-19 vaccine is currently the only CCP virus vaccine authorised to be used on children over 12 years old by the UK’s medicines regulator.

The JCVI has previously recommended giving one dose of the vaccine to all 16–17-year-olds.

The extent of any indirect benefits healthy children can gain from CCP virus vaccination is “highly uncertain” according to current data on the impact of vaccination on transmission in the short and medium term, the JCVI said.

A number of recent studies suggested that while the CCP virus vaccines are still effective against serious disease, it’s efficiency in reducing transmission is largely diminished in a Delta variant-dominated environment.

The JCVI added that due to school closures during previous lockdowns, there’s limited understanding of how schools can impact transmission in wider society, and the lack of understanding “increases this uncertainty about the potential impact of vaccination.”

With regard to the safety of the Pfizer/BioNTech COVID-19 vaccine, which is an mRNA vaccine, JCVI said that “there is increasingly robust evidence of an association between vaccination with mRNA COVID-19 vaccines and myocarditis.”

While the adverse event is still very rare and mostly short, “the clinical picture is atypical and the medium to long-term (months to years) prognosis, including the possibility of persistence of tissue damage resulting from inflammation, is currently uncertain as sufficient follow-up time has not yet occurred,” the statement says.

While healthy 12–15-year-olds can gain little from the CCP virus vaccine, children in this age group with underlying health conditions are still advised to get vaccinated.

The JCVI has previously recommended giving the vaccine to 12–15-year-olds with severe neuro disabilities, Down’s syndrome, immunosuppression, and multiple or severe learning disabilities.

The offer is now extended to 12–15-year-olds who have conditions including hematological malignancy, sickle cell disease, type 1 diabetes, and congenital heart disease.

The United States, Israel, Australia, and a number of European countries have started or will start to offer CCP virus vaccination to 12–15-year-olds.

VACCINES & SAFETY
Reports of Rare Body Inflammation After COVID-19 Vaccinations Being Investigated by EU Watchdog
By Jack Phillips September 3, 2021 Updated: September 3, 2021 biggersmaller Print
The European Union’s drug regulator said it is reviewing the risk of a body inflammation condition in connection to the Pfizer-BioNTech COVID-19 vaccine.

The European Medicines Agency’s safety panel is looking into a report of a 17-year-old male teen from Denmark having developed Multisystem Inflammatory Syndrome (MIS). The teen has fully recovered, the agency said, adding the condition was reported after other COVID-19 vaccines.

“MIS is rare and its incidence rate before the COVID-19 pandemic estimated from five European countries was around 2 to 6 cases per 100,000 per year in children and adolescents below 20 years of age and below 2 cases per 100,000 per year in adults aged 20 years or more,” said the regulator in a statement. “At this stage, there is no change to the current EU recommendations for the use of COVID-19 vaccines.”

The condition was previously reported in people following a COVID-19 infection unrelated to vaccines, according to the health agency. But the Danish 17 year old had no such medical history.

“It is important to understand that a careful assessment of MIS is ongoing, and it has not been concluded that mRNA COVID-19 vaccines cause MIS,” a Pfizer spokesperson told Reuters. The Epoch Times has contacted the company for comment.

Five cases of MIS were reported in the European Economic Area as of Aug. 19 after the Pfizer vaccine, while one case was reported with each Johnson & Johnson’s and Moderna’s vaccine, the European regulator said.

Safety data released by the CDC and Pfizer at a meeting on Monday did not include any incidences of MIS in those who took the vaccine, which was granted full approval in the United States last month.

The European safety panel said it is investigating cases of blood clots in the veins, known as venous thromboembolism, in connection to the Johnson & Johnson shot.

“Venous thromboembolism was included in the risk management plan for COVID-19 Vaccine Janssen as a safety issue to be investigated, based on a higher proportion of cases of venous thromboembolism observed within the vaccinated group versus the placebo group in the first clinical studies used to authorize this vaccine,” according to the European Medicines Agency.

COVID-19 is the illness caused by the CCP (Chinese Communist Party) virus. 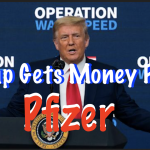 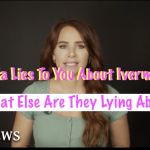