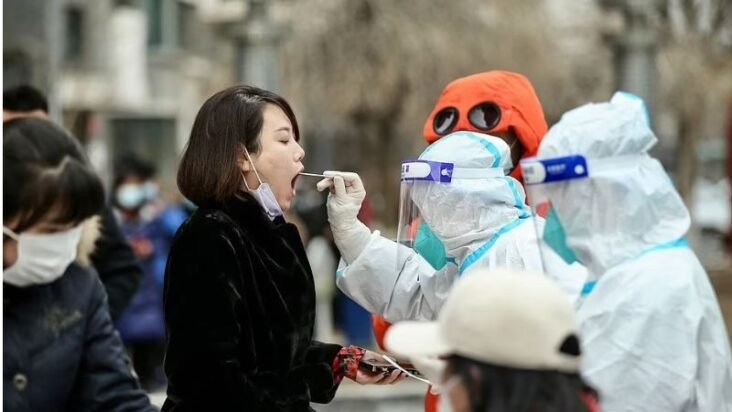 Authorities across China are trying to stem the spread of the country’s worst Covid outbreak in two years, putting tens of millions of people under harsh restrictions, curbing transport and shutting factories.

Some of the toughest measures have been applied in the key manufacturing hubs of Shenzhen, Dongguan and Changchun, as well as the Chinese financial centre of Shanghai, which is home to the world’s busiest container port.

Shenzhen’s port, Yantian, handles about 90% of all China’s electronics shipments. Foxconn, which produces Apple iPhones, had to close down its factories in Shenzhen, although these have been allowed to reopen under strict Covid controls.

Other companies which have warned Covid curbs are impacting their businesses include Toyota, Volkswagen and KFC operator Yum China. Electronic goods that could see supply issues include everything from electric scooters and toys to air conditioning units and USB sticks.

Experts warned the shutdowns could cause yet more disruption to global supply chains that have already been stretched to their limit by Covid – but said the situation would only become critical if they last for more than a few weeks.

Last year, a global logistics crisis caused by Covid and a shortage of HGV drivers saw hundreds of ships unable to dock and unload their goods, and vast piles of empty containers appearing in fields near major UK container ports.

As a result, businesses were left with huge delays to shipments, with retailers struggling to import popular Christmas gifts.

‘We need to remember this comes off the back of existing supply chain disruption over the last two years. At the margin this is very unhelpful, but the extent of the disruption depends on how long these lockdowns go on for.

‘This is not a peak trading period for retailers but if it were to extend into the summer selling season that would be far more potentially disruptive than if they last one or two weeks at this time of year.’

Shenzhen’s 17.5million residents have been ordered not to leave their homes unless necessary and public transport has been halted as the country battles its worst virus outbreak in two years.

A source with knowledge of the global logistics industry said the lockdowns may persuade British companies to begin looking for alternative sources for their products and different ways to import them, such as via air freight.

‘The majority of goods that come out of Shenzhen go to the west coast of America, so we won’t see a huge knock-on immediately in Britain – but it’s something we’re keeping a close eye on,’ the source told MailOnline.

It could have an impact if these lockdowns go on for a long time.

‘The minute a lockdown happens somewhere, the industry will look for alternative ways to move goods and alternative sources for their products. So currently there’s no reason for panic.’

Fabien Gaussorgues, who provides contract manufacturing services from a factory in Dongguan on China’s south coast, said he was struggling to procure parts needed for electric scooters, warehouse robots and electric toys because of the shutdowns.

‘It’s not critical yet but it’s getting more difficult every day,’ Mr Gaussorgues said. ‘Suppliers in Shenzhen cannot produce, so they’re not delivering goods. So next week we don’t have material for production,’ he added.

Lens Technology, which supplies lenses and glass material to customers such as Apple, said on Monday the production and delivery of some products would be impacted after it suspended work at its plant in Dongguan – a northern city.

Laurence Dellicott, Director of Supply Chain Services at MySupply by Avnet Silica, warned Apple users in the UK could see delays to the launch of the new iPhone latest this year if the disruption continues.

‘The Apple supply chain can expect delays to production, which are on top of existing global supply problems, however, we can’t be certain how big the impact of this lockdown will be for the global tech giant,’ he told Metro.

‘This could mean delays for the launch of the new iPhone later in the year, or a severely reduced output.’

Netac Technology, which makes portable hard drives and USB flash drives, similarly warned of shipment delays as its factory in Shenzhen had to stop work. 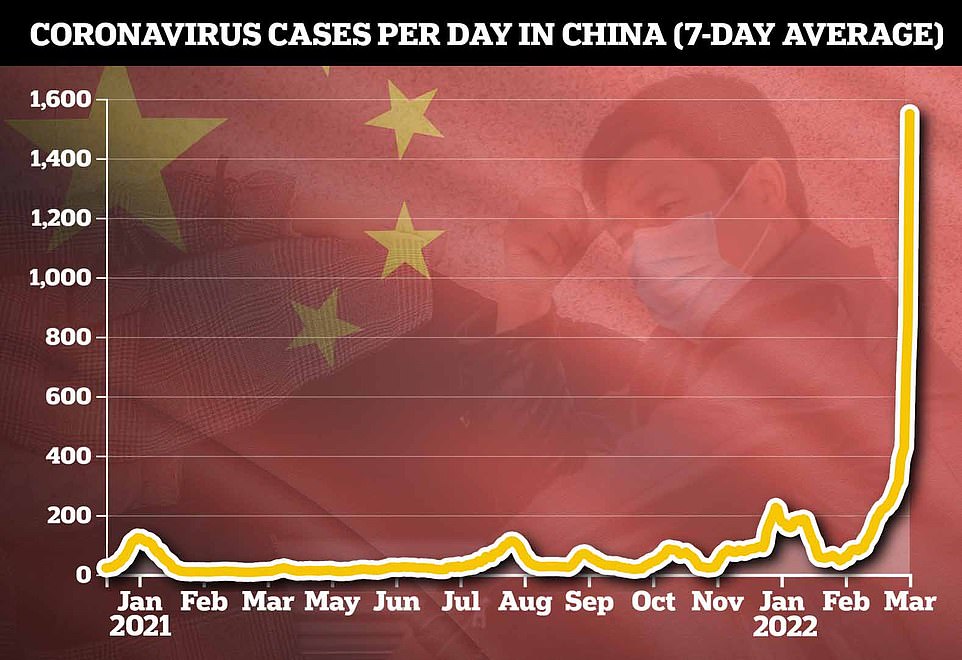 While major ports in Shenzhen and Shanghai said they were operating normally, logistic providers said there were trucking delays due to road and testing restrictions and some firms in Shenzhen had stopped their warehouses from accepting deliveries.

Refinitiv data showed increased container congestion at key Chinese shipping hubs, with the number of vessels awaiting docking in the outer anchorages of the Yangtze Estuary, Pearl River Delta, Zhoushan and Qingdao port more than double the average of March 2021.

Chinese share prices, which plunged on Monday, slumped to close at 21-month lows yesterday as surging coronavirus cases threatened the outlook for the world’s second-largest economy.

Zhaopeng Xing of ANZ Research said he believed Chinese officials ‘can manage Omicron’ as well as before within a month or so.

‘The shock is short-lived,’ he said, adding that it would be unlikely to hit the long-term outlook.

China reported 5,280 new Covid-19 cases yesterday, more than double the previous day’s tally, as the highly transmissible Omicron variant spread across a country that has stuck tightly to a zero-Covid strategy. China reported 5,280 new Covid cases yesterday, more than double the previous day’s tally, as the highly transmissible Omicron variant spread across a country (a woman takes a Covid test in Shenyang, north-eastern China)
That approach, which pivots on hard localised lockdowns and has left China virtually cut off from the outside world for two years, appears stretched to the limit as Omicron finds its way into communities.

At least 13 cities nationwide were fully locked down as of yesterday, and several others had partial lockdowns, with some 15,000 infections reported nationwide in March.

Scenes of closed neighbourhoods, panic buying and police cordons cast back to the early phase of the pandemic, which first emerged in China in late 2019.

Although cases from the chaotic initial outbreak in Wuhan in early 2020 are widely believed to have been under-reported, life since then had largely returned to normal in China under its strict zero-Covid approach.

Health officials have urged people over 60 to get vaccinated – including the third booster jab – as soon as possible.

Around 80 percent of people in that age group are double-vaccinated, according to official data – but Beijing is anxiously watching the situation over the border in Hong Kong, which now has the world’s highest virus death rates due to low inoculation among its oldest residents.

Health official Jiao Yahui said at a press briefing Tuesday that ‘the risk of severe illness is very high’ for people in that age group.

The northeastern province of Jilin has been worst-hit by Omicron with over 3,000 new cases on Tuesday, according to the National Health Commission.

Residents of several cities there including the provincial capital of Changchun – home to nine million people – are under stay-at-home orders.

Health officials said over 8,200 Jilin residents have now been hospitalised, with the vast majority showing mild or no symptoms.

Shenzhen is three days into a lockdown, with gaps seen on supermarket shelves, while China’s largest city Shanghai is under a lattice of restrictions.

City officials said at a press conference yesterday that ‘it is not necessary to lock down Shanghai at present’, instead opting for more ‘precise’ measures. 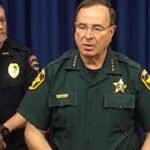